The news has been running around the world that Honda has been suffered by cyber attacks in the past few days.
In this article, we analyze the sample (*) of SNAKE ransomware that was uploaded to VirusTotal, and would like to share the information we found through our analysis. Although some information has already been published outside Japan, it seems that there are little information available in Japanese, so I would appreciate it if you could use it as a reference.

We do not know if this sample is related to the cyber attack against Honda. Please note that this article only describes analysis results of the sample with the above hash value.

First of all, the sample in question was uploaded from Japan to VirusTotal around June 8th as follows.

Fig. 1 - Uploaded to VirusTotal from Japan

SNAKE ransomware, also known as EKANS(SNAKE reverse reading), is a new ransomware that emerged in December 2019.

SNAKE body was developed in the GO-language, a relatively new open-source development language developed by google about a decade ago, and compiled into the EXE-format. One of the backgrounds created in the GO language is that it can be developed on multiple platforms, which is considered to be an advantage of the developer.

The following illustration shows the strings inside malware, that indicates that it was developed in the GO language with an account name of Admin3 has been developed in Windows environment.

Fig. 2 - SNAKE was developed in GO language on Windows platform

(note) PE files developed in GO have fixed compilation date and time value of 1970/1/1 because Time Date Stamp is set to 0x0.

When SNAKE is started, it registers a mutex called "EKANS" to the system.
This prevents the activation of other EKANS while SNAKE is already in operation, preventing unintentional multiple infections of SNAKE in the same PC.

Next, the following specific-domain name resolution is checked as a unique behavior of this particular SNAKE:

In addition, check if name resolution for the above domain is equal to the following IP address, if not, terminate the operation, if it is equal, continue the operation.

In other words, this specimen is a ransomware specially built for a unique set of name resolution and IP address.
As we've said in our previous blogs, targeted ransomware in recent years tends to create behaviors tailored to the target, so even seemingly the same type of ransomware often vary in motion. 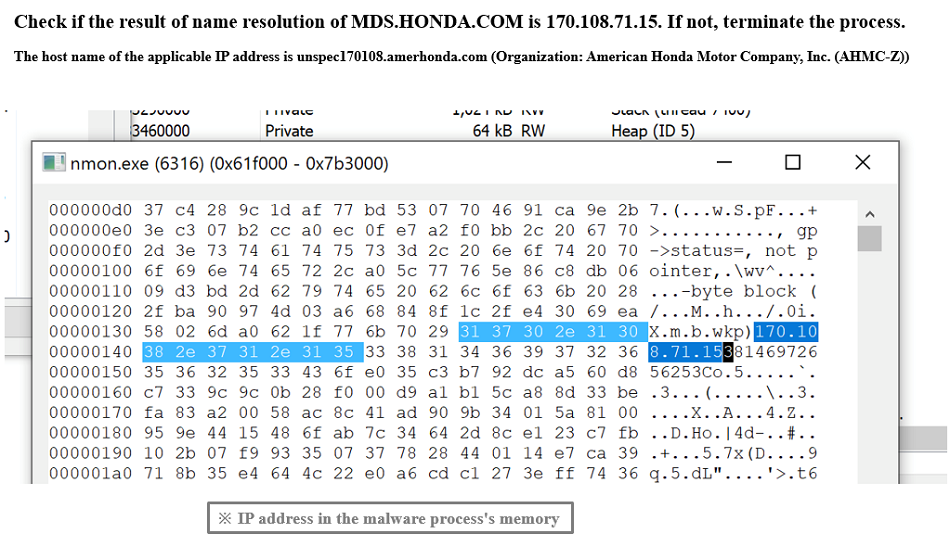 Following shows the behavior of SNAKE in case name resolution failed to match to the name of the relevant domain.
(SNAKE behavior is shown in time order from top to bottom in the following picture)

The part with red frame is a process resolving the name of the domain. In case the domain cannot be resolved, errors are returned to GetAddrInfoW, and SNAKE stops working and terminates. In another words, it does not work on PCs that cannot resolve MDS[.]HONDA[.]COM. 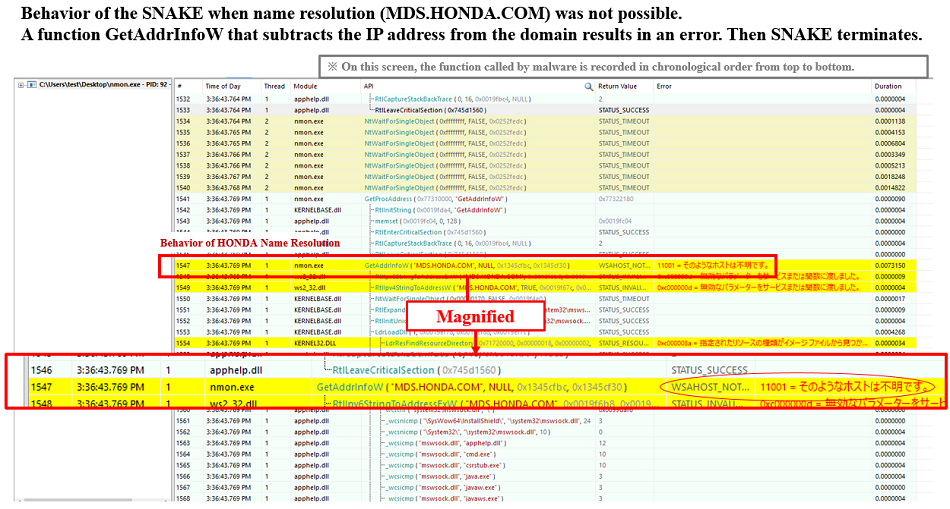 On the other hand, If you run SNAKE in a spoofed environment so that 170[.]108[.]71[.]15 is responded against MDS[.]HONDA[.]COM name resolution, a successful (=ERROR_SUCCESS) reply is returned and SNAKE continues to operate afterwards, as follows:
In other words, this ransomware is made to work only in the particular environment in which 170[.]108[.]71[.]15 is responded against MDS[.]HONDA[.]COM name resolution. 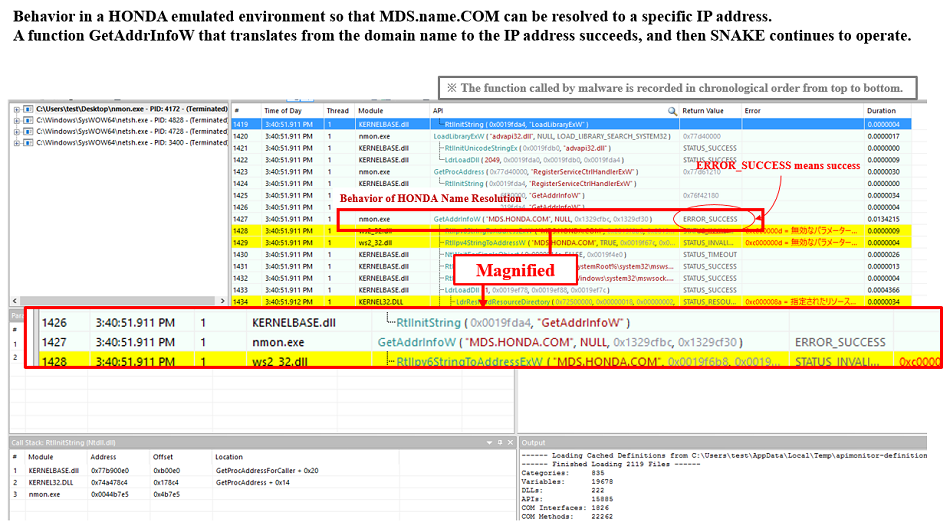 Fig. 7 - Operation continues when name resolution is possible for a specific IP address

These approaches make it impossible to grasp the behavior of this specimen in an automated analysis environment or an immediate inspection environment where the name resolution fails, and thus it could be one of the effective analysis/survey jamming.


■ Activities in environments where name resolution is available

Once SNAKE realizes it is a good operating environment (that is, an environment where name resolution stated above is succeeded), now SNAKE changes Windows firewall settings.
Specifically, following command is passed to netsh.exe (network tool, comes with Windows):

This will block all incoming and outgoing connections for all profiles that do not match the ingress and egress rules using Windows firewall function.

Then enable the firewall configuration by passing the following command to netsh.exe:

As a result, all communications that do not match the firewall's existing rules are blocked, making many applications unable to communicate. This mechanism, which uses legitimate Windows firewalls to block network communication during encryption, is a unique phenomenon of this ransomware.

Then, attempt to stop multiple services, such as system or security system. 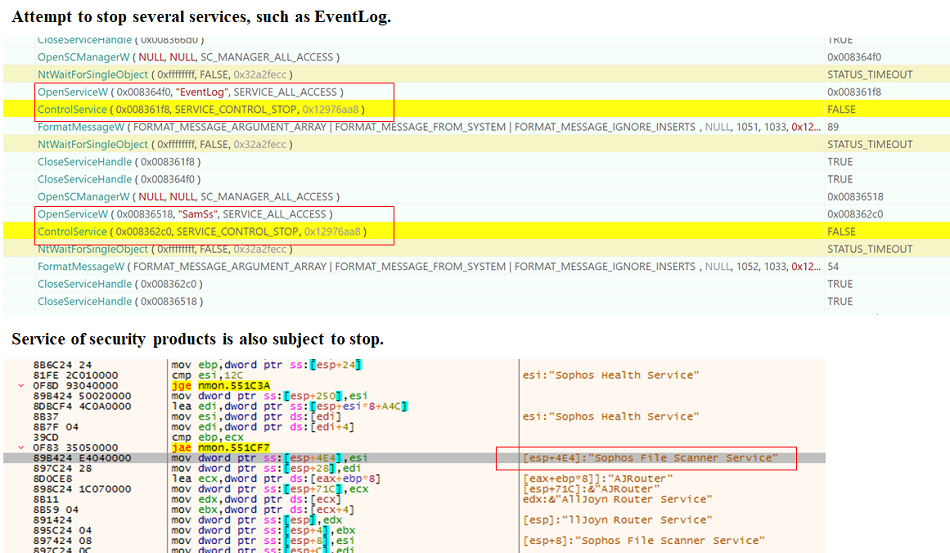 In addition, multiple legitimate processes are forcibly terminated, which may interfere with encryption and recovery activities. 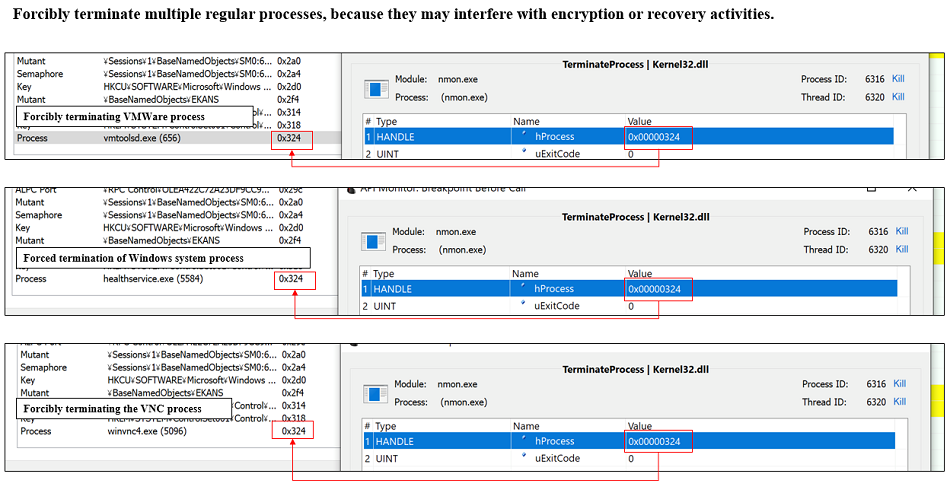 After the environment settings are ready, encryption of the files that is the main process of the ransomware begins.
File encryption takes all drives available in the system and encrypts them in order from the beginning of the drive.
The following image shows how the encryption process begins, and it is searching to encrypt the files in Recycle.Bin (Trash folder) found at the beginning of the C drive. After that, the accessible files contained in each folder of the PC are encrypted one after the other. 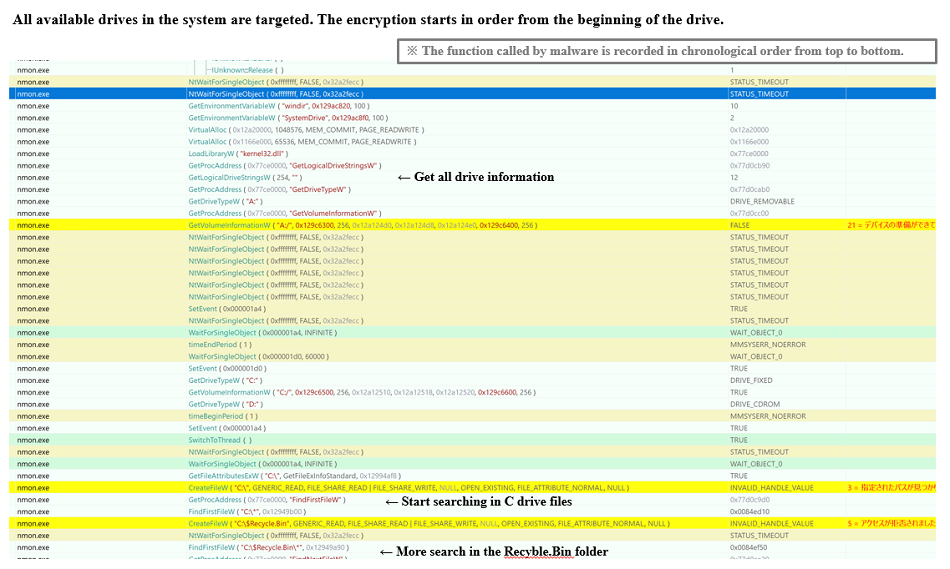 The following file extensions (portion) for encryption are pre-determined. 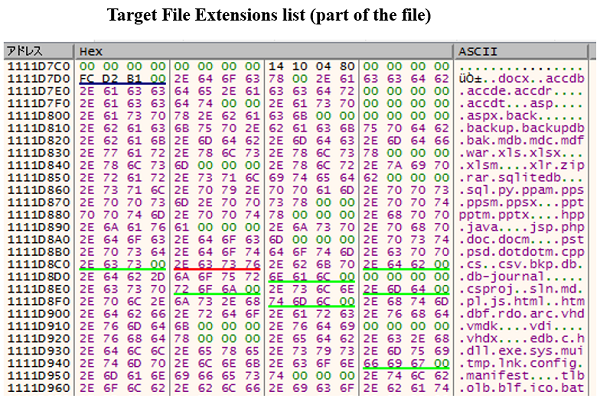 Fig. 13 - Extensions of the file to be encrypted (part)

SNAKE does not handle multiple-process encryption, such as MegaCortex and LockerGoga, but uses a single process to encrypt files.

During the encryption process, Windows system folders (such as system-based files and Windows folders) are excluded from encryption, and Windows remains operational even when infected with SNAKE. However, as described above, various services and processes are stopped, and many programs including EXE files are also encrypted, so that the system of the terminal that has been infected to this specimen will be totally unstable. 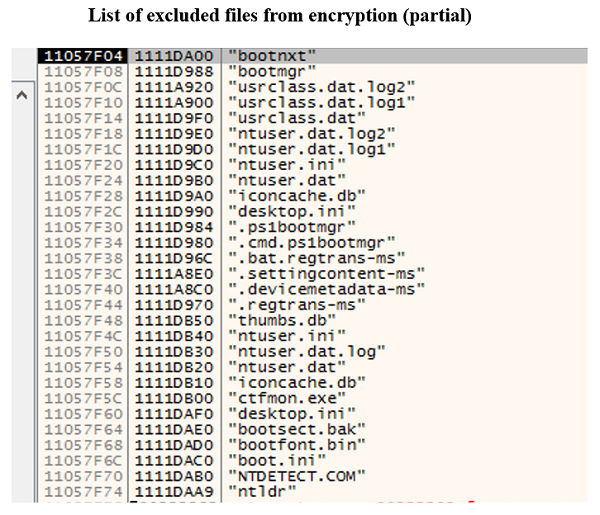 Common ransomware often changes or adds encrypted file extensions to a particular string (for example, .locked), but all files encrypted by SNAKE are appended with a random string at the end of the original extension.

Fig. 16 - Comparing before and after SNAKE encryption 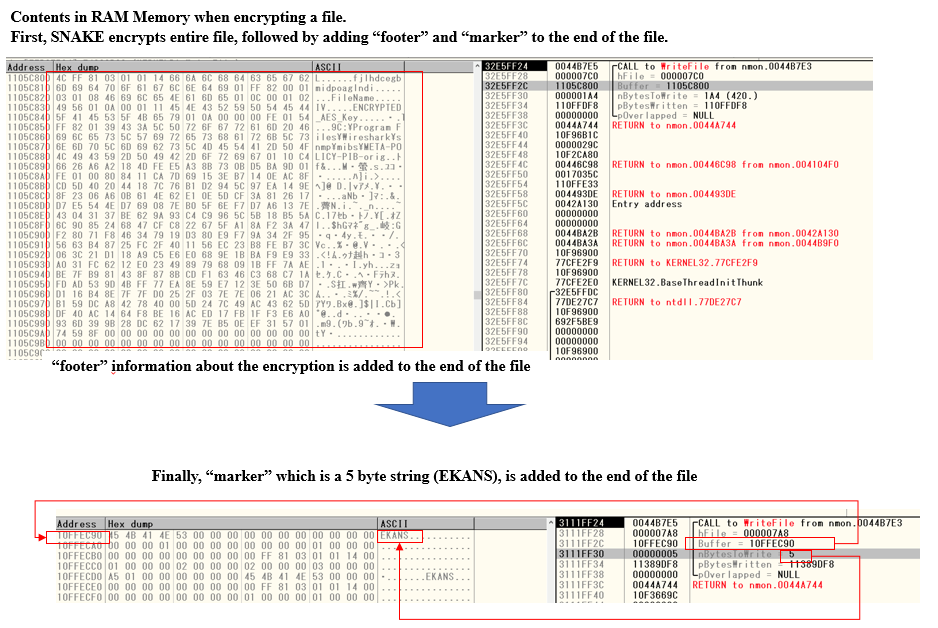 Fig. 17 - SNAKE added data to the end of an encrypted file 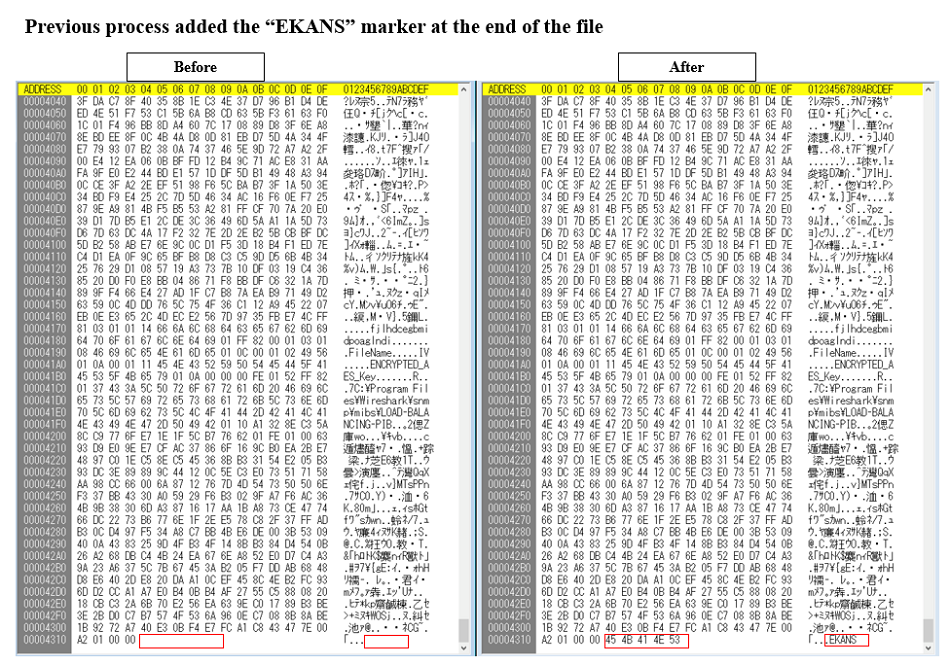 Fig. 18 - Comparing before and after SNAKE. "EKANS" marker added at the end of the encrypted file

Encrypted file is shown in below, and you can determine if it is a SNAKE encrypted file by looking at the last 5 bytes of the file. 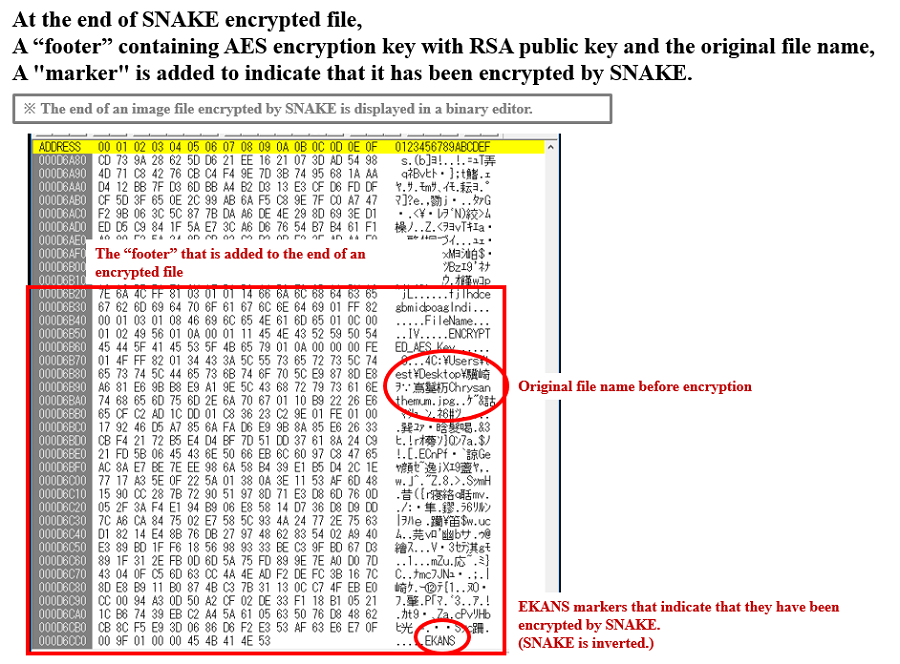 Fig. 19 - Structure of end of file, encrypted by SNAKE

The RSA public key included in the ransomware is shown below.

The file operation during encryption is implemented in the following flow. Even if it is developed in GO language, from Windows API point of view, it is the same file manipulation flow found in the normal ransomware, that is eventually utilizing WriteFile and ReadFile. 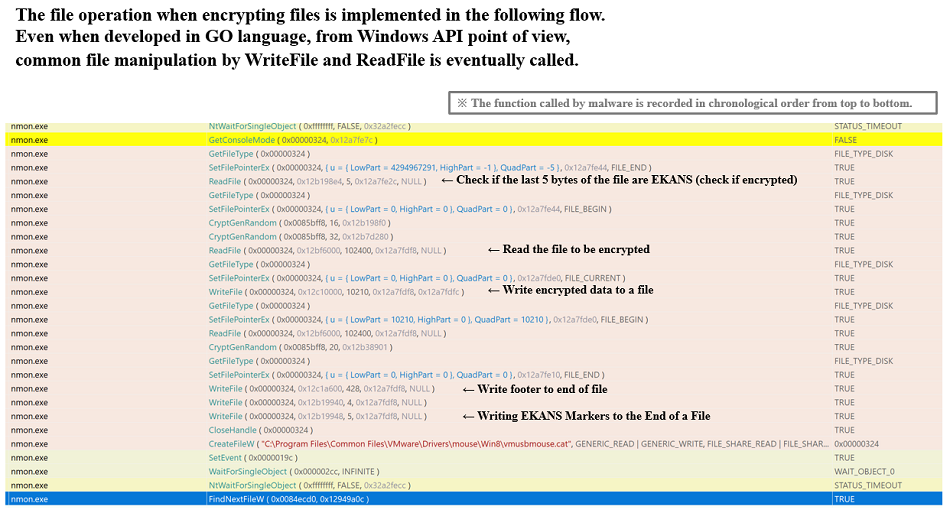 Fig. 20 - Details of file operations when encrypting a single file

Fig. 21 - Renaming all files at once after they have been encrypted

When all encryption are completed, SNAKE disables all firewalls with the following command:

Fig. 22 - Disabling the firewall after the encryption process

In other words, SNAKE performs a series of tasks, such as blocking network communications from being sent to and from Windows firewall prior to encrypting files, preventing recovery activities and monitoring across the network during file encryption, and after file encryption is complete, breaking those blocks.

A unique feature of this specimen is that it specially works when the work environment is a domain controller.

However, if it determines that the infected environment is a domain controller, it does not encrypt any files. Instead, it creates threatening letters on Windows desktop of Public User and under the root directory of C drive (C:¥). 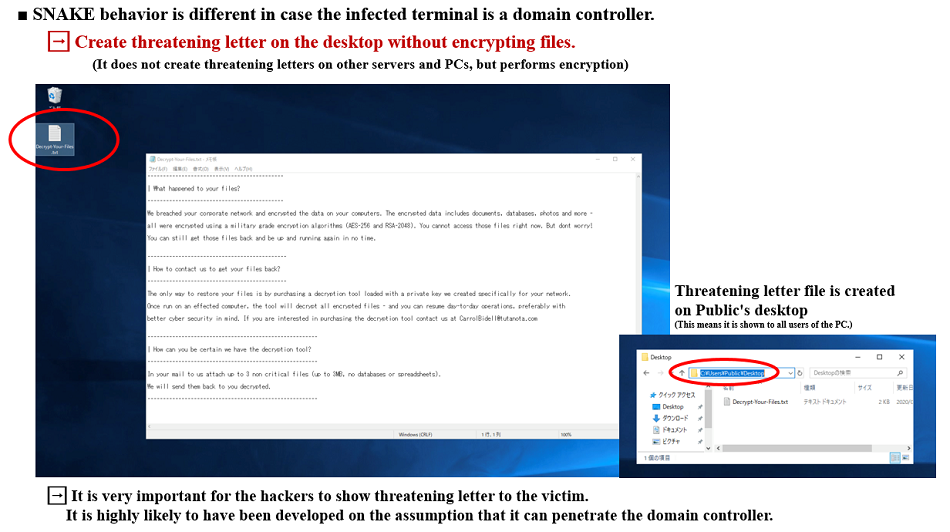 Fig. 23 - Create a threatening letter only on domain controller

■ How to detect domain controllers

In this section, I will explain more in detail about the mechanism of identifying domain controllers. 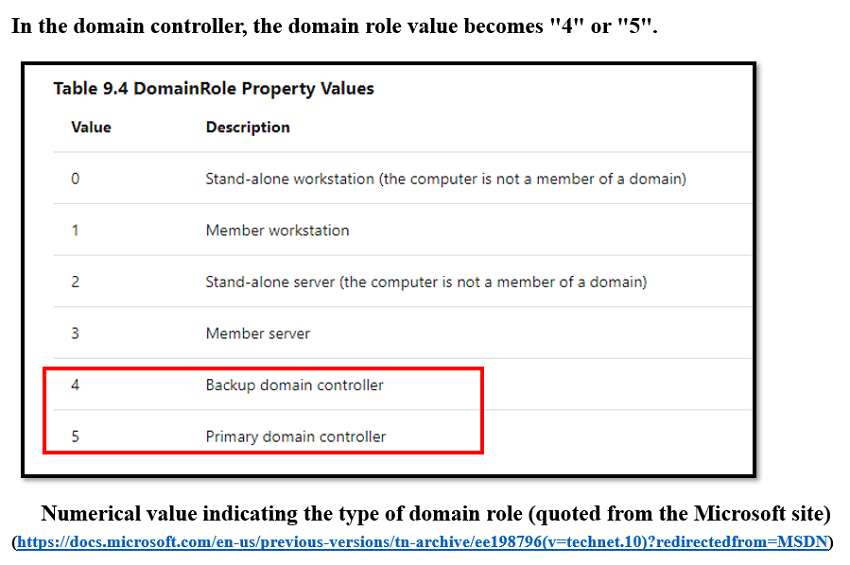 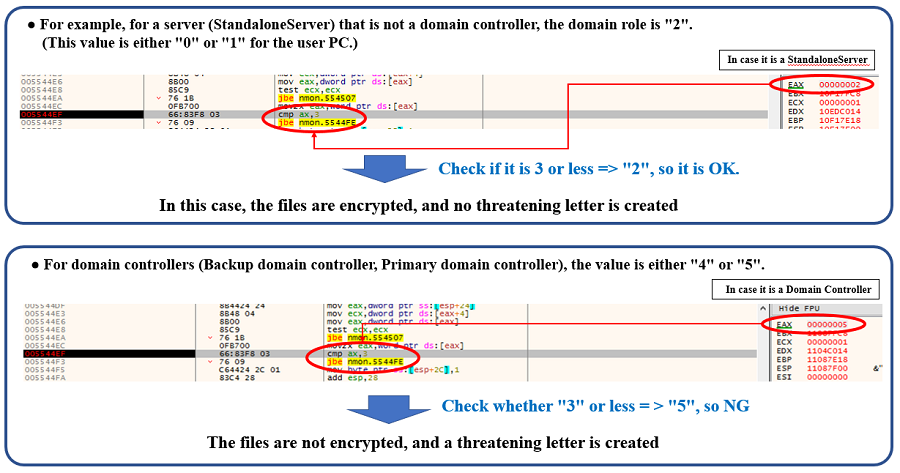 Fig. 26 – How to identify domain role

The following is the process by which SNAKE branches its behavior depending on the domain role value.

If SNAKE identifies it is a domain controller, then it obtains the path to Windows desktop of Public User. 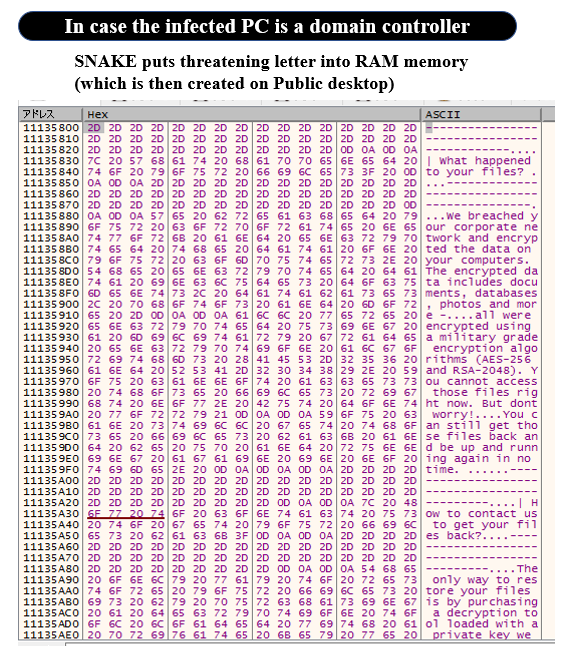 Other behaviors, such as horizontal expansion and file theft, have not been confirmed at the present time.

In view of this situation, one of the possibilities for the infection route of this specimen to general user terminals is the distribution of this specimen to each terminal via the domain controller with the supervisor authority/system authority, rather than by a user's double click.

The results of the analysis described above show that the following symptom occurs on the terminal that has been infected to this specimen.

Fig. 30 - Symptoms of the infected PC by this SNAKE

As mentioned at the beginning, we do not have any information other than this specimen, so there is no evidence that this specimen was actually used in Honda's cyber attack. The fact is that, the specimen analyzed this time has been developed so that it works only on terminals under the environment that can resolve (MDS[.]HONDA[.]COM) to specific IP address (170[.]108[.]71[.]15).

As mentioned in previous blog posts, targeted ransomware in recent years tends to be sent after tuning the behavior according to the attack target organization. As a general intrusion route for targeted ransomware, intrusion routes aimed at RDP, VNC, etc. may be targeted. Therefore, I recommend that you re-check RDP and other services have not been exposed to the Internet.

To read other blog entries by Takashi Yoshikawa, click here.

To read other blog entries by Kei Sugawara, click here.