In order to expand the “recommender system” to the security field, we have developed a system called PyRecommender which recommends injection codes for engineers to test web app vulnerabilities. So, we will explain the mechanism of the system and show the demo.


Our system vectorizes various patterns of vulnerabilities using a large number of vulnerability assessments we have conducted in the past, and it learns the patterns using machine learning. If it detects the behavior of a possible vulnerability, it recommends the optimum injection codes based on the learning result.


In this blog, we will use reflection-type XSS as an example to explain.

The Investigator lists parameter values that are reflected in the HTTP response while crawling the target web app. It then examines the output locations of each parameter value, available symbols and script strings and vectorizes the data.


Figure 3 Result of the observation

The Investigator uses the following predefined conversion table to vectorize the result of the observation. 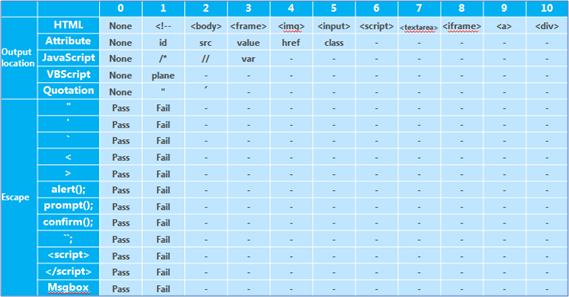 
The Investigator passes the vectorized features of the web app to the Recommender using the mechanisms above.


As you can see, the Investigator’s role is to examine the output locations of the parameter values, available symbols and script strings and to convert the result into feature vectors. We have developed the Investigator for the purpose of this verification, but if your vulnerability scanner or crawler has a similar function, you can use it instead.

The Recommender outputs (recommends) the optimal injection codes to test for vulnerabilities using feature vectors generated by the Investigator.


We developed the recommender engine using a multilayer perceptron (MLP) which is a machine learning algorithm (Figure 5).

The MLP receives a feature vector from a blue node and outputs an injection code from a red node that corresponds to the input feature vector. The injection codes are output in the order of most likely to successfully exploit the possible vulnerability. Figure 6 shows an example of a recommendation.

Figure 6 Example of a recommendation

In this example, the Recommender recommends the string ["></iframe><script>alert();</script>] with a 99.5% chance of successful exploit.


By the way, MLP is a supervised learning model, so it needs to pre-learn. In other words, we need to prepare various vulnerability patterns as learning data. For this blog, we used the data from WAVSEP's XSS case (about 1,300 patterns) which we manually collected for the learning.

You can see the demonstration below.

Figure 7 Result of an recommendation (examples)


Let's look at some of the requests that used the recommended injection codes and the responses. For the ease of viewing, URL encoding is not applied.

As shown above, we were able to run the scripts using the recommended injection codes.


In this way, using the Investigator which vectorizes the behavior of web apps and the Recommender which learns the patterns of various XSS, we were able to make a correct assessment for the XSS vulnerability.


We would also like to point out that, in the case of an unlearned vulnerability pattern, PyRecommender can recommend an injection code that may or may not be able to run a script, depending on the pattern. In such case, an engineer manually adds learning data and makes the Recommender re-learn, so it will be able to recommend injection codes with higher accuracy the next time. In other words, the Recommender gets smarter by being repeatedly used.

Our conclusions for this verification are:

The learning data used in this verification were simple cases from WAVSEP.
Also, we created the data manually, so the number of data we were able to incorporate was limited. In order to solve this problem, it is necessary to have a mechanism that can automatically vectorize real test results generated in large quantities in bug bounty programs or vulnerability assessments and use them as learning data.


Finally, although what’s shown on this blog is at a basic level, next time we will write about a mechanism to improve the recommendation's robust performance as an intermediate level. Specifically, we will use the Convolutional Neural Network instead of MLP and also verify that PyRecommender can maintain and improve recommendation accuracy with even less learning data.

To read other blog entries by Isao Takaesu, click here.